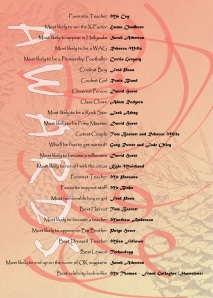 Here’s something we haven’t covered yet. Nicola actually drafted this article, for our forthcoming Knowledge and Yearbook Help system, but I’ve trimmed it up for here as so many people are interested!

The big thing for making your awards work is to be sure it’s inclusive and the questions are interesting for everyone in the year.

You could have a small survey at school to let people pick out polls to vote on, or to select nominees. It’s good to try to make them funny, with some in jokes about the school 🙂

With the nominees, if you’re selecting a few for each award, include as many people as possible somewhere. Don’t put the same people – or all people from one social group – up for every awards. Try to spread the nominations around. It’ll get everyone more involved!

Here are some example questions that previous customers have used in the awards. You may or may not want separate questions for male and female winners:

Head to our Youtube channel for bitesize yearbook tutorials